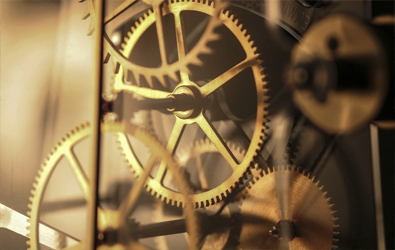 The Buchanan story began long before the name was registered in London UK as a business specialising in Traditional Clock making. If we trace it further back, we travel south around the globe until we reach the beautiful city of Cape Town, South Africa. From here we head inland along the scenic Garden Route through deep valleys famous for their rich grapes and special wines. Six hours inland we reach a small country town nestled at the foot of a mountain, deep in the Karoo ‘bushveld’ . This is the same land that the English royalty visited to partake in genuine wild game hunting trips and where the English and Dutch settlers left their architectural tastes in the timeless homesteads which are still passed down from generation to generation of sheep farmers.

In this quiet country town a dream was born, where the fascination of mechanics is combined with art in the instrument which allowed man to reference history to – Time – indicated by hands and numerals of a clock. Three generations back, clocks were being disassembled, studied, repaired and re-assembled, breathing life back into them for another hundred years.

Then came the decision to move into the very centre of history and art – England. This would open the door to studying works that were made by true masters such as Harrison, Tompion, Janvier, Breguet in the British and Science Museums and private collections where the beauty and complexity of these pieces could be absorbed and infused into new pieces, new works of art, that would keep the world alive with the fascination of mechanics combined with art.

In 1999, in Chelmsford, Essex, Buchanan of Chelmsford was formed and work began. A year later the first clock was finished – N0.1. This led to No 2, a specially commissioned retirement piece. Articles on these clocks led to No 3. And then No. 4. – all commissioned pieces. By this stage Buchanan had become involved in repair and maintenance of various historic clocks, assisting in maintaining the double remontior Gillet and Johnson turret clock at the Royal Courts of Justice. Buchanan also designed major support element required for the relocation of the Martin Burgess World Time Sculpture Clock from the Schroeder bank building in Cheapside to the City Bank Building in Canary Warf.

November 2006, to reunite with family, Buchanan moved to Bowral, Australia, home of the famous cricketer – Sir Donald Bradman – This region often noted for its English weather patterns, landscape, and society was realised to be the perfect settling spot for the next chapter in Buchanan’s  story.

Buchanan – a family business – continues to manufacture and restore some of the highest quality time pieces in the world.